What's wrong with the Greeks and the Greek Economic Crisis?

When the people of Greece saw their democratically elected Prime Minister George Papandreou forced out of office in November of 2011 and replaced by an unelected Conservative technocrat, Lucas Papademos, most were unaware of the bigger picture of what was happening all around them.

Similarly, most in the United States were equally as ignorant when, in 2008, despite the switchboards at the US Capitol collapsing under the volume of phone calls from constituents urging a “no” vote, our elected representatives voted “yes” at the behest of Bush's Treasury Secretary Henry Paulsen and jammed through the biggest bailout of Wall Street in our nation’s history.

But now, as the Bank of England, a key player in the ongoing Eurozone crisis, announces that former investment banker Mark Carney will be its new chief, we can't afford to ignore what's happening around the world.

Steadily – and stealthily – Goldman Sachs is carrying out a global coup d’etat.
Max Keiser lashing out against Goldman Sachs, defending Greece! You MUST WATCH this, if you are interested in the Greek debt crisis and/or the "financial terrorists" causing it, as Max calls them.


A Swedish documentary about the economic crisis in Greece. The documentary was made by Alexandra Pascalidou on behalf of SVT Swedish television. Since 2011 there have been cases of children fainting at school and teachers finding out that they have had no dinner or breakfast, or have a main meal only once a day. The Ministry of Education has now a new program of School lunches for 2.500 children in Greece.


“The Greek people are anarchic and difficult to tame. For this reason we must strike deep into their cultural roots: Perhaps then we can force them to conform. I mean, of course, to strike at their language, their religion, their cultural and historical reserves, so that we can neutralize their ability to develop, to distinguish themselves, or to prevail; thereby removing them as an obstacle to our strategically vital plans in the Balkans, the Mediterranean, and the Middle East.” -Henry Kissinger

As reported in the popular Greek magazine, Oikonomikos Tachydromos on 14 Aug. 1997, Henry Kissinger, while addressing a group of Washington, D.C. businessmen in Sept.1974 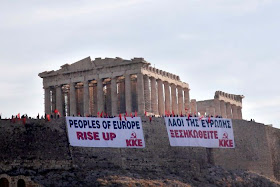 Under the headline "Plot against the Greeks", Financial Times Deutschland said the aid package was in fact a rescue for Germany and euro zone countries, not for Greece, adding: "Athens would be better off with insolvency".

"Thank you, dear Greeks, for allowing us to save you. Thank you for taking our billions, which my tax contributions will have the honor to guarantee. But is it not clear that you are drawing the short straw with this deal? With this aid package, we are really only aiding ourselves we are bailing out our own banks and investors. Would you kindly pinch the money from your pensioners, functionaries, and hopefully a bit from your bloated military please? Thank you for doing it for us, whatever your reasoning may be." 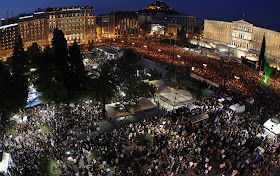 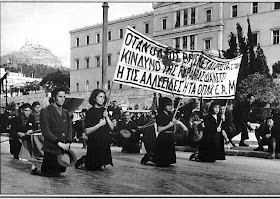