2012 Obama vs Romney: The Illusion of Choice

In this exclusive 80 minute video interview, legendary author G. Edward Griffin explains how his research, which spans no less than 5 decades, has revealed a banking elite obsessed with enforcing a world government under a collectivist model that will crush individualism and eventually institute martial law as a response to the inevitable backlash that will be generated as a result of a fundamental re-shaping of society.

“When a well-packaged web of lies has been sold gradually to the masses over generations, the truth will seem utterly preposterous and its speaker a raving lunatic.” –Dresden James

Griffin discusses the similarities between the extreme left and the extreme right in the false political paradigm and how this highlights a recurring theme - collectivism. 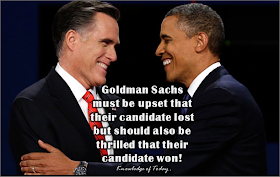 Collectivism is the opposite of individualism and believes that the interests of the individual must be sacrificed for the greater good of the greater number, explains Griffin, uniting the doctrines of communism and fascism. Both the Republican and Democrat parties in the United States are committed to advancing collectivism and this is why the same policies are followed no matter who is voted in to the White House.


“All collectivist systems eventually deteriorate into a police state because that's the only way you can hold it together,” warns Griffin.

Carroll Quigley, Georgetown University Professor and mentor to former president Bill Clinton, explained in his book Tragedy and Hope and The Anglo-American Establishment, how the elite maintained a silent dictatorship while fooling people into thinking they had political freedom, by creating squabbles between the two parties in terms of slogans and leadership, while all the time controlling both from the top down and pursuing the same agenda. Griffin documents how the Tea Party, after its beginnings as a grass roots movement, was later hijacked by the Republicans through the likes of Sarah Palin and Glenn Beck.

Pointing out how Republicans and Democrats agree on the most important topics, such as US foreign policy, endless wars in the Middle East, and the dominance of the private banking system over the economy, Griffin lays out how the left-right hoax is used to steer the destiny of America.

Griffin also talks at length on a myriad of other important subjects, such as the move towards a Chinese-style censored Internet, the demonization of the John Birch Society as a racist extremist group, the Hegelian dialectic, the power of tax-exempt foundations and the Council on Foreign Relations, the movement towards world government, and the question of whether the elite are really worried about the growing awareness of their agenda amongst Americans.